TEMP:
Announcements for TEMP employment are open September 29th thru October 6th. Temporary position selections will be made late-January.


Please visit our Hiring page for details and updates.

The Malheur Rappel Crew traces its roots back to 1971, the first time a Helitack crew staffed a helicopter on Airport Hill in John Day. From that beginning the crew has grown into a solid organization with as many as 30 aerial-delivered firefighters. Our program hosts three exclusive-use aircraft out of our state-of-the-art facility in Eastern OR; a Bell 205 rappel aircraft, an AS350B3 A-Star IA Helitack platform, and a Kaman K-1200 K-Max national Type 1. Multiple Oregon Department of Forestry aviation assets are also based out of the John Day Airbase, including the ODF Type 3 Helitack Crew, a UH-1H restricted Type 2, a light fixed-wing recon platform and an active SEAT base.

In addition to our local/regional IA responsibilities we mobilize for initial attack and large fire support missions all across the lower 48 and Alaska.

The Malheur Rappel Crew is one of 11 rappel bases making up the USFS National Rappel Program. Helicopter rappelling was born in the Pacific NW and the region hosts 5 of the national rappel bases. The primary mission profile for the R6 rappel aircraft is quick-response initial attack. Helicopter rappelling is a proven and highly efficient tool to rapidly deliver firefighters to remote or priority incidents. Aircraft and rappeller mobilization is coordinated at the regional and national level.

Our airbase is located in John Day to facilitate an effective response to any smoke report on the Malheur National Forest and the Strawberry Mountain Wilderness. In addition we boast 1.7 million acres of timbered rappel country in our back yard and four wilderness areas in our response zone. Big timber and few roadways have lead to a successful utilization of rappellers for initial attack, and for 40 years there has been a helicopter based out of John Day.

We don’t look at rappelling as merely a tool in the box; we specialize in it and take pride in our excellent record of safety & effectiveness. Our rookie training and veteran recertification regimens stand among the finest in the nation. Rappellers can expect to be called on to use this skill for initial attack on wildfire, emergency medical situations, staffing lookouts, inserting single resource firefighters and a variety of other applications anywhere in the country.

While the crew's main focus is on fire suppression, crewmembers will find themselves with the opportunity to engage in a wide variety of aviation assignments. There are many paths to follow on the aviation side of USFS fire. Rappellers will have a chance to complete their Helicopter Crewmember task books and eventually dig in to the many posts within the HECM field, from Air Base Radio Operator to Helibase Manager. In addition to our rotor-wings, MRC also hosts one single engine air tanker on the airfield and crewmembers can fill in as SEAT loaders when needed. 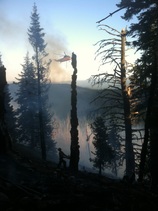 Fire assignments have taken MRC crewmembers to nearly every corner of the country, to include extended suppression and fire activities in Alaska, the southwest and southeastern states.

Crewmembers will be challenged with the opportunity to suppress fire in every fuel type the U.S. has to offer and during a typical season may be looking back at 500 to 800 hours of overtime for their efforts. Our crewmembers are challenged frequently with a variety of missions and objectives. . .  you could rappel out on an initial attack 2-man fire, be plugged in to a 20-person handcrew, throw in with an ignitions team or staff a helibase position.

Rx fire implementation usually takes place at the head and tail ends of fire season, allowing crewmembers the opportunity to gain valuable knowledge in fire & fuels management at the beginning and end of the summer. The Malheur National Forest is able to maintain a comprehensive prescribed fire program which burns thousands of acres every season. Crewmembers may also expect to see Rx opportunities on neighboring forests such as the Wallowa-Whitman, Umatilla, Deschutes and Ochoco. In addition, crewmembers can be exposed to aerial ignition operations and may choose to explore PLDO quals. Fuels management qualifications and assignments are attainable for those with the desire to drag a torch or crunch the numbers.

Click on the links up at the top or dig around in the drop-down menus to explore life here at MRC.