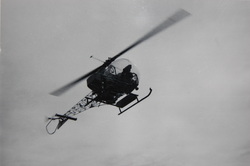 In the 1960's the Malheur National Forest began using helicopters for firefighting and forest resource management, hosting as many as three helicopters on forest ground. The first helitack crew was formed in 1971 when Larry Sohr and Stu Fields showed up with a box of pulaskis, a couple QBs and a bubble-canopied Bell 47. Within a few years the need for a permanent helitack facility was recognized, and somewhere in the hazy depths of the 1970's the Forest Service broke ground "on the hill" adjacent to the Grant County Airport. The John Day Helitack Crew hit the ground running, picking up smokes from corner to corner in the 1.7 million acre Malheur National Forest.

In 1991 the crew put on their rappel harnesses for the first time and the Malheur Rappel Crew was born. Two years later the National Type 2 program kicked off, allowing the crew to provide rappellers and large fire support from coast to coast. 1993 also saw the beginning of the Single Engine Air Tanker program at John Day, now consisting of 2 SEATs in the busiest part of the season. With five other rappel crews in region 6 all training toward the same goal, the first Regional Rappel Academy was established in 2000 at John Day. The crew currently hosts 25 to 30 rappellers, two national I.A.helicopters, a USFS heavy helicopter, ODF restricted helicopter, 1 SEAT and can accommodate numerous other aircraft on the airport grounds. The MRC airbase is often transformed into a type 1 helibase for local large fire support. 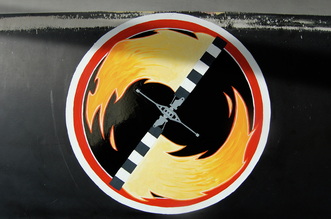 In the autumn of 2010 the crew packed up and moved to their new facility, a state of the art joint-use airbase. The new building sits only a stone's throw from the old base and houses both the rappellers and the Grant County Airport business offices. It was a bittersweet move! The "old base" often seemed like a helitack/rappel history museum, with its mementos of past fires, old crew photos and cozy atmosphere. However we were not sad to leave behind the leaky windows, the mice, the tiny saw shop, the moldy showers... Forty years ago the first helitack crew was formed, and in 2011 we began our operational season out of the new facility, standing on the shoulders of all the people who made us what we are.
Click on these links to dig deeper:         Legacy          Past Crew Photos