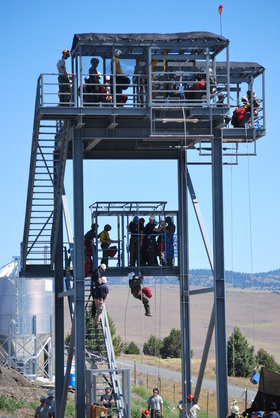 Due to changes in the rappel world over the past few years, a national standardized rappel training was developed, with John Day hosting the first National Rappel Training in 2011. Rappellers and rookie candidates from all over the country came to the John Day Airbase to train and certify as helicopter rappellers. The Region 6 Rappel Academy model, successful for ten years in training and recertifying rappellers, was expanded to meet the need to train all USFS rappellers in a standardized fashion. In 2012 the utilization of two similar rappel towers in Salmon, ID made it possible for rappellers to train at a third location.  Each year all rappel bases look forward to sending their best vets and spotters to rookie academy in an effort to effectively train the new class of rookie rappellers.

In this week-long intensive training academy, rookies begin in the classroom and progress to ground training, helicopter "mock-ups", and high tower simulators and must achieve full tower proficiency in all parts of the rappel sequence before continuing on to live helicopter rappels. Veteran Rappellers have an opportunity to enhance their abilities and rappel spotters take the time to sharpen their skills as well.

National Rappel Academy is a performance based training, requiring rookie candidates to demonstrate full proficiency at each stage of the training before continuing on. Rookie candidates are blended into squads and enter academy in a configuration which mirrors fire operations. There is an IC, Operations Chief, Safety, Helibase Manager, etc. Candidates can expect to be challenged mentally and physically throughout the week during all phases of the training.

The Malheur Rappel Crew takes pride in being actively engaged in the training of each national rookie class.  Cooperation between the rappel programs helps to achieve the highest standard of training for rookie rappellers as well as integrate all rappellers into the national program to effectively facilitate national boosting. 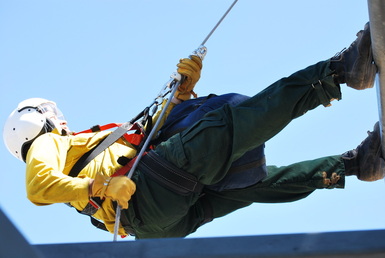 The National Academy has several objectives. Mainly, to ensure that all veteran rappellers, rookie candidates, and rappel spotter trainees receive the highest quality training experience possible. The centralization and standardization of our academy makes this possible, ensuring all participants meet the same high standard.

Another objective stressed by the academy designers is to develop leadership within the fire & aviation community. We see this take place each season as former rookies transition into academy squadleader roles as well as the roles of rappel spotter trainee and lead instructor.

To develop and promote an attitude of safety is also on the mind of all our program managers, and is an integral part of the academy and agency philosophy.  We firmly believe that doing a job correctly, is inherently doing a job safely.

After the initial 4 weeks of training at their respective bases, each of the rappel crews in the nation will gather at Salmon, ID to begin rappel training. This now includes rappellers from regions 1, 4, 5, and 6.  Rookie candidates are blended into several groups and are further divided into squads where they will be assigned veteran rappellers as squad leaders. The squad leaders and spotter cadre for the group will stay with each group through the duration of the academy.

Rookie candidates can expect to begin in the classroom where they will become familiar with equipment and basic safety procedures. It is stressed from the outset that their full attention and focus be employed in order to progress to each new station. Hands-on training will follow, equipment will be introduced, and candidates will cycle through the ground station until academy spotters are confident in rookies' abilities.

If candidates progress to the rappel simulator tower, they will be expected to learn and demonstrate all aspects of the rappel sequence before continuing on. This can be one of the most strenuous parts of academy, as rookies will cycle through tower rappels many times.  When ground, tower and "mock-up" rappel sequences have been demonstrated without error, candidates will move into live rappels. A number of rappel sequences will be completed without hesitation or error for candidates to complete this academy. There is no "demotion training", no going back to mock-ups or the rappel tower.
Click here to learn more about our training program.